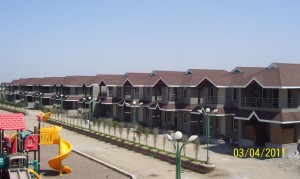 Rajkot is the beautiful vibrant city and land of opportunity, located on the banks of the Aii and Nyari river in Saurashtra region of Gujarat, India. It is the 22nd fastest growing city worldwide. The city is well-known for its handicraft, textile industry, dress materials, fine silver work and royal living & hospitality, most often referred as “Rangiloo Rajkot” meaning colourful vibrant city where people like to enjoy themselves to the fullest no matter what season or time of the day.

Inspired by the life of the city Amidhara Developers Pvt Ltd decided to develop a Lakeview Row Houses Resort in Rajkot of Two Lakh sq ft area with international standard amenities and the first of its kind in Rajkot. He engaged Architect M/s Ankoor Sanghvi and team who designed it with the concept having multiple level concrete roof. The site was designed and developed by Penguin Software Technology. Rajkot has semi-arid climate, with hot, dry summers and wet monsoon. The average temperature in winter varies between 10 deg C to 20 deg C with low humidity. The most important phenomena that is associated wit the city of Rajkot is ‘cyclone’ which generally occurs in the Arabian sea during the months after the rainy season and the region experiences a lot of rainfall and high-speed winds after the monsoon season. Thunderstorms are another important part of the Rajkot weather.

Certain Teed Shingles Firehalt was opted by client to provide aesthetic appeal to the project roof design and to protect from the heavy rain and  wind as Shingles functionally provides a total waterproof, weather proof and maintenance free solution. Firehalt shingles are built with the industry’s toughest fiber glass mat base. Two pieces of the shingle are firmly laminated together in a special tough asphalt cement. All Firehalt shingles have self sealing adhesive strips. Clint gone for Terracotta shade which has given a beautiful look to the Row Houses.